A day in the lives of tele-counsellors: how these unsung heroes are providing emotional and mental support through helplines 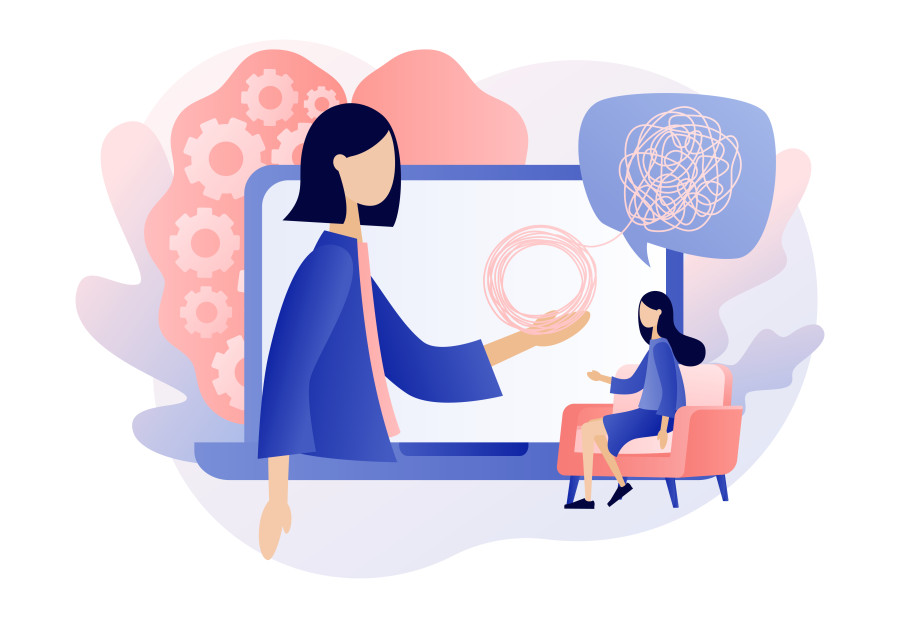 Nirdesh Shrestha’s days start with him taking care of daily house chores. After he is done, he takes time out for a mindfulness session, followed by a workout. Then, after taking care of other household affairs, around 3 pm, he sits down at his make-do home office and starts working.

Shrestha works as a tele-counsellor, taking in calls from people across the country who seek help in coping with the fear and stress that the current pandemic has brought into their lives.

“We rolled out our free tele-counselling services as soon as the lockdown came into effect, as we knew that the pandemic would affect people psychologically and make them more anxious,” says Shrestha, a psycho-social counsellor at Crystal Counseling and Psychotherapy and Training Center. He is a part of a network of psycho-social counsellors, who have formed the Counselor’s Alliance for Psychosocial Support and Counseling, a programme that addresses the needs of those who need free counseling given the current situation.

Shrestha, who works for two hours every day, from 3-5 pm, provides free tele-counseling sessions which can last for 45 minutes to an hour, depending on the nature of what the caller is going through. From teaching breathing techniques to muscular retention exercise, to just listening to the callers empathetically, Shrestha converses with callers who are struggling with overthinking, fear, and other mental issues. “Most of the callers are fearful due to the uncertainty the pandemic has brought in their lives,” says Shrestha. “They mostly call to talk about their fear and other feelings out loud.”

The current pandemic has brought to the surface many underlying issues pertaining to the global health system, and due to the constant exposure to negative news and other stressors, many people are getting affected psychologically, say, doctors. And the lack of certainty and the rising economic and social crisis is accelerating mental health problems among people.

To cope with the stress and anxiety triggered by the current state of affairs, there are many who are resorting to mental helplines to seek out help. And while these helplines are offering many people much help, the job is taking an emotional and psychological toll on the counselors.

But given the need for psychological assistance right and because of the physical barriers that are in place as a result of the lockdown, tele-counseling services are proving to be crucial for those who are seeking mental help, according to experts. And such helplines and tele-counseling services are not new to Nepal, with many help services having been set up by both governmental and non-governmental organisations to assist survivors of domestic violence as well as those who have suicidal thoughts.

“Given the restrictions of physical movement we have, tele-counseling services can be effective in this time, as it can provide mental help services to people distantly as well,” says Dr Kamal Gautam, psychiatrist.

Despite the lack of physical meetings, which is an important assessment tool for a counsellor to identify a patient’s issues, this is the time for service providers to widen their reach, according to Gautam. Counselling at such an uneasy time as now should not be limited to physical presence, he says. “Tele-counseling services won’t only benefit the people who previously were suffering from mental health issues, but it can also be used by those who are now affected psychologically because of the pandemic which is very natural,” says Gautam, who’s also the Executive Director of Transcultural Psychosocial Organization (TPO), that has set up a mental helpline number since March 24, the day the nation-wide lockdown began.

The availability of such services has encouraged more people to seek out help, says Parbati Shrestha, one of the coordinators of the clinical team set up by TPO Nepal. People from various districts are calling in asking for help, she says. “We are even receiving calls for help from remote areas like Baitadi and Darchula,” says Shrestha.

Some days, calls come in as early as 8 am, says Parbati, until they close for the day, around 6 pm. The callers who call their helpline are first received by a helpline operator. The operators then note down the details and handover the case to the counselors who are on duty. “At first we try our best to listen to them with full attention,” says Parbati. “Only after they open up we try to empathise with them and validate their feelings.”

While the length of the call can be anywhere between 45 minutes to one hour, the concerns of the people range from their mental issues to even simple things like safety and sanitation measures, she says. But when it comes to a crisis, the situation is a little more complex, as everyone is hit emotionally on different levels. “Even during the earthquake, things were tough. But we could calm people by reassuring them that they could be safe in open space. However the pandemic’s nature of the emergency is different as many are living in uncertain times,” says Parbati.

And because of this uncertainty, even if she works for three days in a week, receiving calls after calls from people who are seeking out various kinds of emotional help is overwhelming for her, she says. “I feel helpless at times when I can’t help them the way they want,” she says.

But the nature of her job itself requires her to be as calm as possible, and she tries to get back on her feet and use her skills in the best possible way for helping people. “If we sound tense or confused, then we might not be able to provide the best help,” says Parbati. To ensure she does her job well, every day after her work shift is over she joins a conference call along with her colleagues where they discuss the day’s cases and even try to extend support to each other by listening and talking about what they are feeling.

For Shrestha as well, even though the pandemic is taking a toll on his personal life, he tries to make the best use of his skill by offering an empathetic ear to those who call him. “If by just being there and listening to their problems and making them talk about their feelings can make them feel good or provide any help, then I feel good of being any use to them,” says Shrestha.

And even if the efforts of tele-counsellors are limited to phone calls only, many callers often call the helpline back, as a follow-up or to express their satisfaction from using the services, says Gautam. “The tele-counseling services are getting effective regardless of the limitations and addressing the health concerns of the people,” says Gautam.

Although the government has launched many schemes for economical uplifting, it hasn’t acknowledged addressing the mental health of its citizens or expanding its mental health services—something telec-counsellors believe need immediate attention, given the impact the current pandemic is making on both physical and psychological health of the people.

“We are receiving calls from so many people from different parts of the country. Many call saying how it took them a lot of courage to even acknowledge that they required help,” says Parbati. “This just paints the larger picture of our country. It shows how much more we need to focus on extending mental health services. Whatever we are doing is very little, but we want to help as much as we can. Even a small effort is a big help to the community.”

Press release_International Day in Support of Victims of Torture